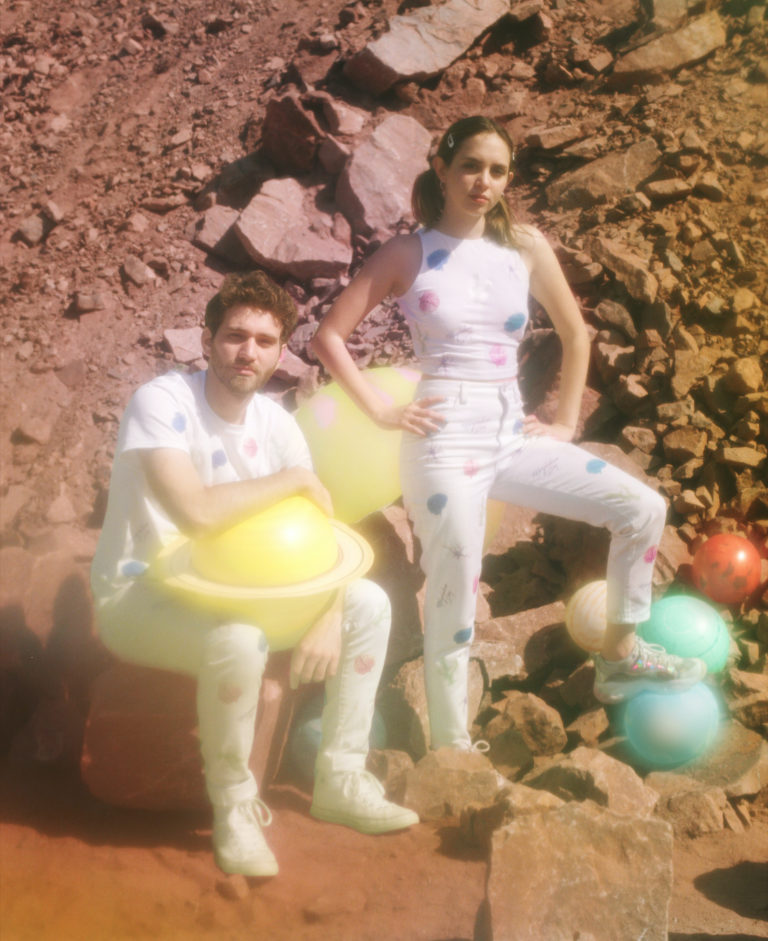 When you pop a vintage VHS tape into a VCR (or cue up a fittingly fuzzy video on YouTube), the screen exudes the neon warmth of a familiar, yet otherworldly era. Magdalena Bay bask in the same grainy glory. The independent Los Angeles duo—Mica Tenenbaum [singer, songwriter] and Matthew Lewin [producer, songwriter]—infuse a throwback spirit into 21st century cinematic pop as they gleefully keep the D.I.Y. edges intact.

Following millions of streams in just two years and early press acclaim, this singular style shines on a string of 2019 singles.

“We’ve always been into weird, old things like classic sci-fi films and retro fashion,” explains Mica. “When we got into pop, we also fell in love with the pop songs of the past. We love taking those retro elements and making them our own.”

“Our influences are classic,” adds Matthew, “but we like to meld them with contemporary production and writing.”

The Miami natives initially crossed paths at an after-school music program in high school. Clicking on a creative level, they launched a prog rock band called Tabula Rasa inspired by Rush, Genesis, Journey, and Yes. Following a handful of independent releases and gigs, the group parted ways as the respective members retreated to college in different corners of the country with Matt at Northeastern University and Mica the University of Pennsylvania. After a year-long musical hiatus, the duo reconnected and began collaborating online as “a long-distance band” which would eventually become Magdalena Bay.

Under the influence of Carly Rae Jepsen, Charli XCX, and Art Angels from Grimes, they picked up a thread from their prog roots a la the “the eighties key changes” and developed a handcrafted sound and vision. Matt produced everything himself, while Mica took over the visuals, editing and directing. They caught an initial buzz with a cover of the Tears For Fears classic “Head Over Heels” appropriately shot on VHS. Their following releases kept the momentum going, with 2017’s Neon generating 1.9 million Spotify streams.

2018 saw the duo regroup on the West Coast, moving to Los Angeles together, upon completion of their respective degrees. Magdalena Bay has since kept up a steady pace through a series of original mini songs and videos, culminating with the 2019 release of their mini mix vol. 1 EP. In between shows, they garnered critical praise as Gorilla Vs Bear touted their 2019 single “Only If You Want It,” claiming it “Takes a pretty morbid theme and wraps it up in a sparkly pop banger that we’re convinced would have hit #1 on the countdown had it dropped back in ’99.”

Expanding their sound, the 2019 summer single “Venice” punctuates a laidback beat with handclaps, a boisterous bass groove, and glimmering flourishes as Mica’s voice seduces on the sun-kissed chant, “Come on, we’re dancing till eternity.” Meanwhile, Matt offers an intriguing counterpoint by way of evocative backing vocals and an apocalyptic undertone.

“We wanted it to be a chill indie pop tune with an undercurrent about the world possibly ending,” Mica explains. “We tried to inject a little weirdness in there. Our own experiences of walking down the Venice Beach boardwalk probably helped with that.”

“I think this one makes us real Californians,” smiles Matt.

Meanwhile, the follow-up single “Good Intentions” shuffles between finger-snaps and a glitchy beat as Mica’s breathy verses give way to a hypnotic hook. “It details the end of a relationship,” Mica explains. “But while the verse and pre-chorus have pain and heartache running through them, the chorus is more of a nihilistic or defeated shrug that says, ‘oh well, we tried and now it’s over.’”

“Stop & Go” shuffles forward on handclaps and shimmering production as Mica urges, “I’ll never let ya stop, don’t stop” before dreamy synths kick in. Elsewhere, “Killshot” tempers glimmers of eighties transmissions with an intimate vocal performance as “Airplane” takes flight on a stark pairing of skittering keys and ethereal echoes. “How To Get Physical” slips from a slick beat into a glossy soundscape and danceable energy with an intentionally “groovy funk bop,” as Matt puts it.

In the end, Magdalena Bay channel a feeling that lasts regardless of era.

“To us, Magdalena Bay is all about crafting great songs and creating a visual world around them,” they agree. “We want to make a world that pulls people in and makes them want to stay forever.”