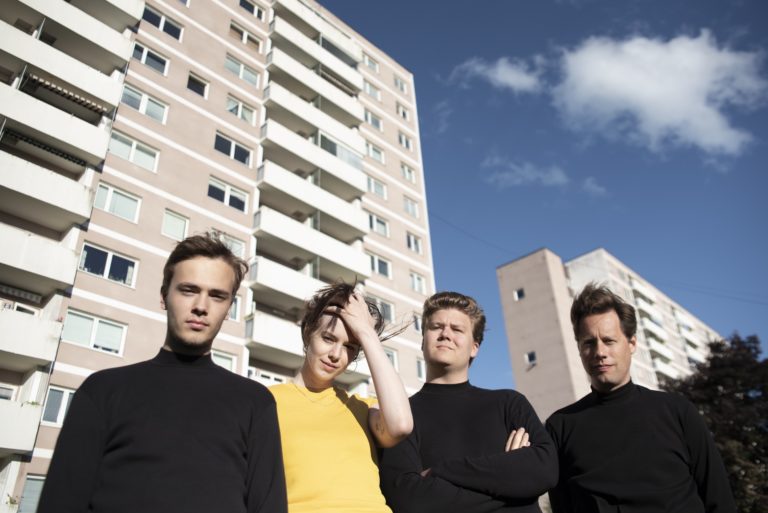 Out of the greyer climes of Oslo— particularly East Oslo with its drizzly expanse of apartment blocks and gas stations stocked with Kent cigs and smut mags— has suddenly come a burst of color by the name of Das Body. Ellie, Kim, Patrik, Didrik— all four were born and bred in Norway and have become fast friends making music that is listenably and undeniably pop, though just a little iffier— pop that feels like a newly-thrifted favorite T-shirt: comfortably worn, slightly sunfaded, and with a cigarette burn on its sleeve. After a few years deep in the studio, Das Body has now emerged with already plenty of buzz from local fests and press, and an EP ready for September with its single “Boys” out this June on Luminelle Recordings.

Their synths and rhythms enter with a rather classic 80s familiarity but quickly take a turn for a sort of new-new-wave. On tracks like the danceable “Boys” and heavily rimmed “The Trap,” the melodies melt at places and wrinkle at the edges. The vocals warble and waver, and occasionally reach into higher, alien pitches. And even the most cheerful of tropes— a vocoded lyric or a Casio-like beat— still betray some shadows to balance out the brightness. Das Body is writing pop music without the sentimentality that oversweetens so much currently on radio rotation. Instead, to their vulnerability, they mix in a little vulgarity, or a little light-heartedness.

“This is all for fun— and if it isn’t fun, really why do any of it at all?” explains their young frontwoman and vocalist Ellie Linden. Fun— both in the writing of music and the plentiful goofing that surrounds it— has driven Das Body since Linden’s very first practices with fellow songwriter Kim, a few years back. According to Linden, Oslo is a grungy little city that wants to be big. Still, its underground is not all that easy to find. So, Das Body just laid low and enjoyed forging their own sound, which they claim they didn’t fully discover until writing the cool, nightriding “Graceland” and the entreating ballade of unreciprocated love, “Know My Name.” With these, and bringing on Patrik on guitar and Didrik on drums, Das Body tossed their previous work and eagerly began assembling their latest four songs into a debut EP for Luminelle, who caught a show on a trip to Oslo and happily asked to sign. Now, with their hat in the ring, Das Body brings a uniquely Nordic odd-pop that is, nonetheless, destined for charts the world over.